How To Tie A Windsor Knot

Men (and women, off course) have always been attracted to fashion, and there are surely some strong reasons for that. It is often said that a gentleman is known for his dress. Being well-dressed transforms your attitude and body language and lifts you emotionally and physically. And what can be a better way to dress well than to wear a tie?

With the present expansion of the fashion world, men are indeed choosing a variety of apparel over the traditional suit and tie, but a tie wearer still commands a superior level of respect. Neckties have always been the symbol of honor and nobility. It represents capability and confidence, and ups your looks by a mile.

But, again, selecting the proper necktie, choosing the best color matching with your shirt or suit, and getting the correct length and width may be difficult. What is more difficult, and equally important, is tying your necktie in a proper knot. As Oscar Wild said, “A well-tied tie is the first serious step in life.” Keeping that in mind, let us discuss one of the most famous and elegant knots – the Windsor Knot. Before learning how to tie a Windsor knot, it’s better to know about the knot a bit. Read on to find out.

What is A Windsor Knot?

The Windsor knot is said to have originated in England, and hence is also known as the England Knot. It is probably the most graceful variant of a tie knot. Legend has it, that this tie knot was invented by, and even named after, the Duke of Windsor, King Edward VIII.

It is again sometimes claimed that King Edward was not exactly fond of the Windsor knot. Rather, he preferred an even wider knot and even had his ties made specially for him from thicker fabrics so that he could get a solid and large knot when tied with the traditional four in hand knot that he generally used. From another perspective, it is also said that the real Windsor knot was invented not by the Duke of Windsor himself, but by his father, George V, who preferred this type of knot over others.

The Windsor Knot is a thick and perfectly triangular tie knot and is the most neatly tied one. This type of knot is mostly favored by people when going for an interview, a meeting, or making a presentation. It looks quite simple and boosts up your confidence pretty well. Men with a bit longer necks look flamboyant in the Windsor knotted tie due to it’s wider and thicker nature, although everyone can wear this form of a knot.

Since the knot uses a good bit of the fabric length of the tie, the Windsor is more suitable for longer and preferably narrower ties. However, the width of the tie should be noticed carefully, as too narrow a shape destroys the elegance of the knot.

The Windsor knot can be tied in two ways and has been named separately – the Full Windsor and the Half Windsor.

Full Windsor And Half Windsor Knots 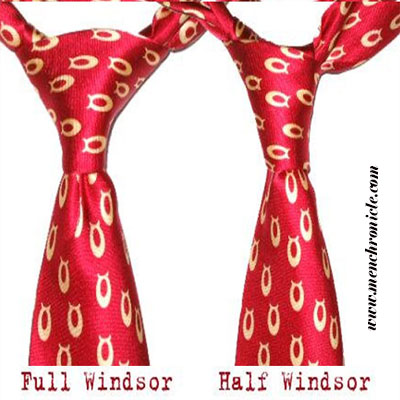 There is not much of a difference between a full and a half Windsor knot. The Full Windsor, also known as the ‘Double Windsor’ or only ‘Windsor,’ is the proper knot, tied perfectly following all the steps, and looks totally symmetrical, while the Half Windsor is done a bit simply, jumping a few steps, and this is a bit leaner than the Full Windsor or Windsor.

When placed side by side, the Windsor and the Half Windsor seems to be quiet identical. The real distinction lies in the person wearing the tie, and the tie which is being worn. If you are a fashion enthusiast, you will surely agree that a thicker tie with a wider knot goes well with a larger man, while a slimmer tie and leaner knot suit a sleek person pretty well. This is what makes up for the difference between the two. A Windsor is better used by a healthier man, while a Half Windsor is perfect for a slim and fit man.

When And How To Use A Windsor Knot?

The Windsor Knot goes well in both formal and informal settings, although it is more preferred for important formal and professional events. It is also perfect for large occasions and adds a higher level of elegance and sophistication to the appearance of the user. The Half Windsor Knot looks almost similar to the Windsor but only smaller in size. Hence, it is also suitable for formal occasions and is preferred more over other traditional knots like a simple knot or the four in hand knot.

The Windsor knot needs a number of loops and turns to be tied, so a greater part of the fabric is used up. That recommends the tie to be quite long for a proper Windsor. For a perfect Windsor knot, the tie length should be around 4cm more than a conventional tie in order to ensure that after tying, the length of the tie remains proper and does not get too short. For the half Windsor, a tie of normal length can be used.

A Windsor knot goes best with shirts having open and wider spread collars or cutaway collars, which is ideal for a large knot. It can be worn with a waistcoat as well. Generally, a person with larger body shape and larger or longer neck should prefer the Windsor over the Half Windsor or any other knot. This is because the larger knot of the Windsor complements well the healthier body or larger neck.

Men with smaller heads and sleek get-up may look disproportional in the large and flashy Windsor knot, but a half Windsor would do good to their style. The Half Windsor may be a bit asymmetrical but looks pretty awesome when done with fine fabric and good textured ties. It also matches best with open-collared shirts.

The Windsor Knotenhancesyour appearance quite well because the large, showy knot allows you to display your tie fabric and design pretty well, even when you are wearing a closed jacket or a coat. However, it looks very well to wear a proper Windsor knot tie of modest color, and couple it with a fine waistcoat or suit.

What Makes A Windsor Knot So Popular?

A man should know how to tie his ties. Tying a necktie properly is of extreme importance because even you have dressed impeccably, a poorly-tied necktie is going to lose it for you. How to tie a tie well, has led men to evolve numerous ways of tying it. A style buff can easily show you a couple dozens of knots for your tie. However, only a handful of these knots have some practicality and form the most classy and commonly used knots. Some of the popular knots for a necktie include:

There are also some other knots that have attracted men’s attention over time, but among these few, what has not been mentioned in the list above, and what tops the chart, is the Windsor and the Half Windsor knots.

The Windsor knot serves most of the purposes, be it any formal meeting or a public event. It is simple in looks, boosts up your personality and confidence, and gives your appearance a touch of elegance. The Windsor knot even possesses a wearing advantage. Unlike most other knots, the Windsor has a number of loops, and when tied properly, it keeps the tie in perfect shape and does not allow it to slip down or get loose.

As far as comfort is concerned, the Windsor Knot goes a long way to keep the tie conveniently in place, and it is extremely comfortable to be worn as it leaves a decent gap between the neck and the collar, not making it too tight or suffocating.

It is a bit complex to tie, but a minute’s hard work gives you a flawlessly symmetrical and triangular shape and a big and wide knot that goes well for almost anyone. And if you want it to be a bit slimmer, then leave out a step while making it, and there you are with a half Windsor, equally graceful and stunning as it’s big brother. No other knot looks better than the Windsor, neither does it have the capability to match every occasion, especially the formal ones.

Now that we have formed an idea about the knot and its classiness let us try to figure out how to tie a Windsor knot.

Step By Step Method Of Tying A Windsor Knot

As we have seen above, the Windsor knot is not the easiest of knots to tie. However, it would not harm to learn to tie the Windsor knot, as a small effort can improve your appearance by a big margin. So, without any more delay, let’s analyze the method of tying a Windsor Knot in detail.

That will get you a good symmetrical triangular Windsor Knot. Place the narrow end through the keeper loop at the back of the wide end, so as to keep it in place.

You can tie a half Windsor also in a similar fashion. It’s even easier and takes less time to learn. You can follow the following steps to get a Half Windsor knot.

The Windsor knot may not seem to be too easy in the beginning, but with some practice, you can surely tie perfect Windsor and Half Windsor Knots quite effortlessly.The Windsor knot has one very useful trait – it is self releasing. That means it is extremely easy to undo the Windsor knot, by simply pulling the narrow end up through the knot.

The most crucial task before wearing a necktie is to tie it in a proper knot, and the Windsor knot is one of the most sophisticated and neat necktie knots. Now that you have an idea of how to tie a Windsor knot, after tying, make sure that the tie is properly adjusted. Your tie should not hang too low; neither should it be too short.

The ideal length of the necktie is ensured when the tip of the tie lies somewhere near your belt, preferably at till the mid-point of the belt buckle. If you feel that there is some problem in adjustment, open the knot and re-do it from the beginning. Match the tie colors well with your shirt or suit. With a proper Windsor or Half Windsor, you are good to go to any event looking classy and confident, and demanding some respect with the powerful and appealing appearance!